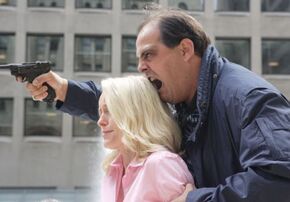 A hostage (Stephanie Morgenstern) is held at gun point.

Scorpio is the pilot episode of Flashpoint.

A man shoots his estranged wife and then takes a hostage outside an office building. The SRU team responds, but their efforts at communication are hampered because of the hostage taker's language.

In the first episode of Flashpoint, the audience is introduced to words and terms that the team uses throughout the series. A man shoots his estranged wife, then takes a hostage outside an office building. The SRU team responds, but their efforts at communication are hampered because the man does not speak English, and no one can identify his language. The man's son shows up and crosses the civilian line, causing police to restrain him. The son tries his best to communicate with his father and talk him out of shooting the hostage. When The Sergeant (Gregory Parker), feels that all efforts are exhausted, he gives permission to shoot the man. The sniper that shot the man, (Ed Lane) is taken by police to see if the use of force was abused. Towards the end of the episode you learn that an SRU officer got promoted to Sergeant (Roland Cray), so he is moving to another team. That means that there is a spot for another person on the team, which is quickly filled by Sam Braddock.

The first episode also introduces some specific words and terms that will be used by the characters on a recurring basis in subsequent episodes. For example:

Retrieved from "https://flashpoint.fandom.com/wiki/Episode:Scorpio?oldid=7450"
Community content is available under CC-BY-SA unless otherwise noted.